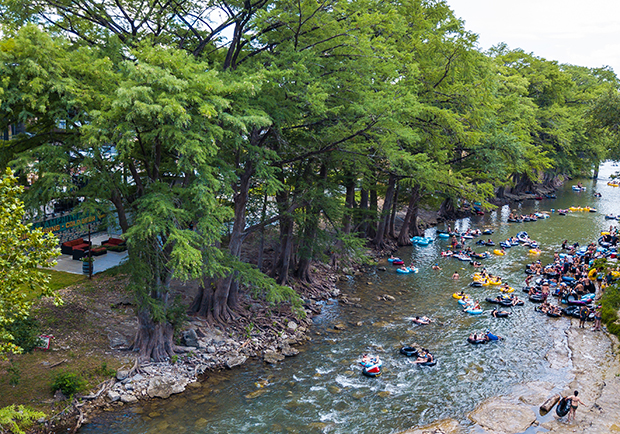 Whitewater Amphitheater’s backstage is a perfect live music setting for those tubing down the Guadalupe River.

Whitewater Amphitheater has been called the Red Rocks of Texas, because like the Colorado concert favorite, the 5,600-capacity venue on the Guadalupe River is set into a glorious natural landscape. Both employ highest quality sound and lights and attract top talent.

For more information, including a performance schedule, visit the Whitewater Amphitheater website. The site includes a tubing coupon for $19.

There are 19 Hideout On the Horseshoe cabins and three luxury condos on the river, but they’re usually booked up the nights the amphitheater is rockin’. Reservations are made through the whitewaterrocks.com site. 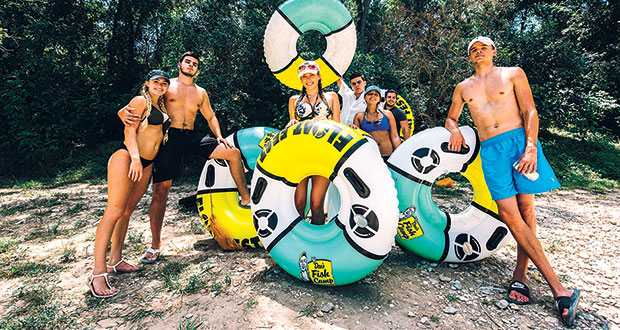 That tunes and tubes go together is the concept behind Float Fest, in its 4th year at the Cool River Ranch outside San Marcos. This fest attracts a young crowd, drawing college and high school kids from Dallas and Houston, as well as San Antonio and Austin, with its mix of dance music and indie rock. This year’s lineup features national acts, such as Weezer, ZEDD, Cage the Elephant, Girl Talk and MGMT, along with top locals Wild Child, Sweet Spirit and Walker Lukens. General admission wristbands for both days start at $109, but Saturday tubing has sold out. There’s free camping for anyone who buys a ticket, which is convenient because the other thing that goes with music and tubing is beer. Everybody’s chugging on the river, but there are never lines for the restrooms.

But Red Rocks doesn’t have a river, where fans can spend the day tubing, kayaking or swinging from ropes into the pristine water. Whitewater’s Horseshoe float is one of the most scenic and popular in Central Texas, and because it’s operated by a concert venue, it’s also one of the most rockin.’ Music fans put sound systems in coolers and crank out their favorite tunes. Some party on the shore, making the two-hour float last all afternoon. Tube rental manager Kris Riebschlaeger estimates that about 60 percent of the folks tubing on the river on concert days also go to the show.

Since the river is practically backstage, it’s not unusual for the night’s acts to go tubing during the day. Texas country star Pat Green has hosted meet-and-greets on the Guadalupe with contest winners. On a recent weekend blowout featuring Ryan Bingham and Steve Earle, opening act Jamestown Revival went right from the river and onto the stage for their soundcheck.

“It’s a great way to relax before a show,” said Tessie Colle, a nurse from Alice, who parked her float behind the stage before taking in the July 2 show with her husband and two grown children. “We drove all this way (150 miles) to see Ryan, but the tubing is a great bonus.” Daughter Jamie added, “It’s a beautiful venue, with all the trees lit up behind the stage.”

Between songs you can sometimes hear the Guadalupe rushing by. There’s really nothing in Texas like this 11-year-old destination venue, which hosts visitors from all over the world, especially when performers such as Bob Dylan, Willie Nelson or Neil Young play.

Other yearly regulars at Whitewater are Nashville superstar Miranda Lambert (August 4-5), Americana faves Avett Brothers (August 19) and such “red dirt” hosses as Randy Rogers Band, Pat Green and Josh Abbott Band, or techno-rockers Ghostland Observatory, who’ve already played this year. Whitewater is on pace to sell 112,000 concert tickets (a $7 million gross) for the 2017 season, up from 72,000 tickets in 2016, says owner Will Korioth. There are 31 concerts on the schedule this year, up from 23. 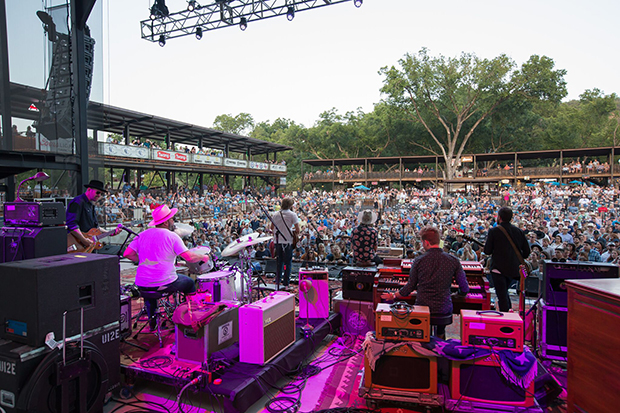 On a recent weekend, performers Jamestown Revival went right from the Guadalupe River and onto the stage for their Whitewater Amphitheater soundcheck.

Bingham remembers the 17-acre Whitewater property when it was a campground with RV hookups. Before the big stage was built in 2006, Bingham played “Open Mike” shows for free in the area that’s now the venue’s beer garden. At the time, he was better known as a bullrider than a songwriter, but he woodshopped songs for his 2007 debut LP Mescalito. That old pallet stage was just a few yards from where Bingham filmed and recorded the fantastic “Ryan Bingham Live,” in front of a sellout crowd, for Amazon music in 2016.

“It’s just had this great Hill Country vibe from the very start,” Bingham said of the venue. “There’s a tradition of singer-songwriters in these parts and the audiences are very supportive.” It got awful rowdy during Bingham’s July 1 set, with the crowd of 4,000 pogoing wildly when the band revved up on the closing of “Southside of Heaven.” But it also got very quiet when the former Texan- now living in Los Angeles and on the road- did a solo acoustic “Weary Kind,” which won him an Oscar in 2010. When the night’s middle act Steve Earle joined Bingham on “Pancho and Lefty” (Townes Van Zandt), “Desperados Waiting For a Train” (Guy Clark) and Earle’s own “Johnny Come Lately,” Whitewater was transformed into the intimate, historic Gruene Hall, 10 miles down the road.

Bingham has seen Whitewater grow from a park for river rats into a world class concert venue, one he looks forward to playing every year. “The owners listen to the feeback from the acts,” he said, sitting in a dressing room as big as most the venues he played in the early 2000s. “There used to not even be a green room. Plus they’ve done production things, like bringing the stage roof up a few feet. Every year we come back, there’s something new. But it still has the same vibe.” The newly-built VIP section is in the middle of the venue, allowing for about 2,000 diehard fans to pack in front of the stage.

After that short interview, Bingham walked down to the river, looking very much like everyone else, in board shorts, flip flops, t-shirt and a ballcap. Nobody recognized him until he walked past the Colle family and they let out a cheer, which Bingham greeted sheepishly. 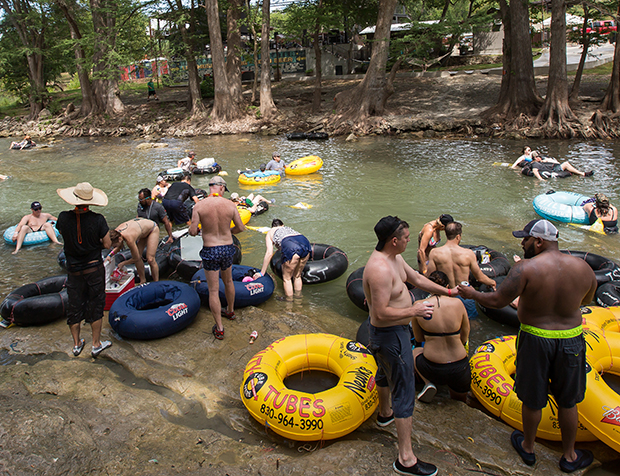 Music fans find a perfect spot, behind Whitewater Amphitheater, to take a break from tubing while catching some tunes.

The fans didn’t bother him, they just continued hanging out in the backstage river on their tubes, getting the VIP treatment for the price of a tube rental. “This river has recharged us,” Tessie says. “We’re ready for tonight’s show!”

The Colles have a hotel in New Braunfels, about a 20-minute drive away, so they could go there and clean up before the show. Or, if time is tight, they could use the free showers on the Whitewater grounds.