The Texanist: Are There Any Decent Dance Halls Left?

A Corpus Christi man pines for the days of two-stepping on those long wooden planks. 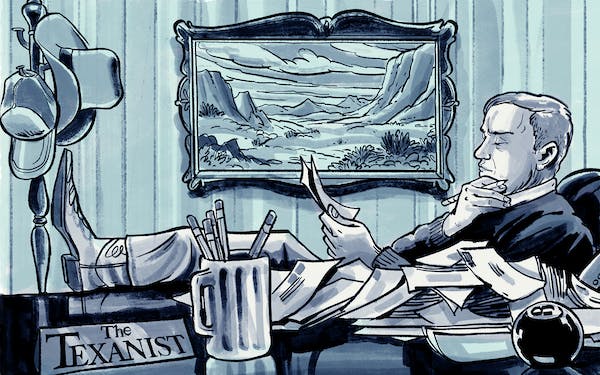 Q: I was raised in Lake Jackson and my friends and I used to follow a band called Jef & the Kickers that was led by a singer from East Bernard named Jef Mayes. We went to Riverside Hall in East Bernard; the now defunct Fairchilds Hall between Needville and Rosenberg; Vrazel Ballroom (famous for polka bands) outside Danbury, where I learned to dance; Snug Harbor, also outside Danbury but further; Eagles Hall in Bay City; and a lot of KC halls and fairgrounds. My wife is from Philadelphia and she has learned to two-step, but we can’t find good dance halls like these anymore. Most places with dancing are pick-up bars and a lot of the old dance halls, like Gruene Hall and Schroeder Hall, now feature concerts. Can you recommend some Hill Country, Gulf Coast, and Houston-area places at which we can dance?

A: That is quite an impressive dance hall circuit for a Southeast Texas boy of the seventies era, of which the Texanist has surmised that you are a veteran, since research indicates that that was the heyday for Jef & the Kickers. And congratulations to you for maintaining what seems to be a severe case of dance fever.

Thank you for reading Texas Monthly

Now more than ever Texans are connecting over shared stories. Enjoy your unlimited access to our site. To have Texas Monthly magazine delivered to your home, become a subscriber today.

The Texanist, as he has recounted here before, enjoyed tripping the light fantastic in and around his own hometown of Temple back in the day—though not quite that far back in the day. The main stops on his early-eighties weekend itineraries were Seaton Star Hall and Tom Sefcik Hall in Seaton; the SPJST halls of Holland and Little River-Academy; the Parish Dance Hall in Westphalia; and sundry Central Texas VFWs. The Debonaires were his Jef and the Kickers.

It’s an unfortunate fact that the traditional old-style dance hall, such as the one you and the Texanist grew up in, are fewer and farther between than they once were, and it has the Texanist fearing for today’s youth. Learning to navigate a dance floor, oftentimes in an old hall owned, operated, and frequented by weathered Germans or Czechs, used to be a rite of passage for youthful Texans. How the young folk today learn to fumble their way through preliminary courting rituals, avoid fisticuffs with drunk yahoos from Rogers, sneak beer, and essay the cotton-eyed Joe the Texanist just does not know. How and where do the millennials and Gen X’ers and Gen Z’ers fill their dance cards nowadays? Do they even have dance cards anymore? Who knows?

One thing the Texanist does know, however, is this: any Texans, young and old and in between, who have never twirled a partner across a dance hall floor are missing out on one of the great Texas traditions. There was at one time, reportedly, as many as a thousand dance halls scattered across the state, a number of which dated to the late 1800s. Some 400 survive today, which is more than the number found in any other state but still a shame. This is according to Texas Dance Hall Preservation, Inc., an Austin-based nonprofit endeavoring to safeguard our historic dance halls through awareness, education, promotion, financial aid, and the like.

Among the fine examples of the still-extant dance halls that the group aims to preserve, there are some real beauties. And the Texanist is, of course, happy to make a few suggestions for you and the missus.

Located outside of Spring Branch, about 25 miles west of New Braunfels, Anhalt Hall has been, since 1908, the quintessence of the Texas dance hall. Monthly Saturday night dances feature great musical outfits like Billy Mata and the Texas Tradition, Johnny Bush and the Bandoleros, and Jody Nix and the Texas Cowboys.

About twenty miles up U.S. 281, just south of Blanco, you’ll find Twin Sisters Dance Hall, which has welcomed dancers since 1870. The hall was once actually two buildings: a bowling alley just yards away constituted the second of the sisters until it fell to fire in 1967. Still, Twin Sisters is a striking place.

Famous Luckenbach also has an eponymous dance hall. And Floore’s Country Store, in Helotes, an old haunt of Willie Nelson that has hosted everybody who is or was anybody in country music, still has free dances every Sunday starting at six.

One of the Texanist’s all-time favorites is Crider’s Rodeo and Dancehall, which sits smack on the banks of the Guadalupe just outside of Hunt and doubles up on the fun every Saturday between Memorial Day and Labor Day with a rodeo, which starts at 8 p.m., and then a dance that follows from 9 p.m. until 1 a.m. Know before you go: “Dancehall” is a bit of a misnomer in that there is no actual hall at Crider’s. The dancing takes place alfresco, right out under the stars.

As far as the Gulf Coast and the Houston area goes, you’re right about the demise of Fairchilds Hall, in Fairchilds. And as you may or may not be aware, Snug Harbor, outside of Alvin, is also no more. Riverside Hall burned down in 1986, but a new Riverside Hall rose from the ashes in 1987. Vrazel Ballroom didn’t get back to the Texanist, but Eagles Hall is still in business. How about bringing your gal along for a visit to the old stomping grounds?

Also, down along the Gulf Coast, keep an eye out for the historic Club Westerner in Victoria. There are lots of weddings and quinceañeras on their web calendar for now, but keep checking back. Both Asleep at the Wheel and Little Joe y La Familia played last year, and on the right night the club’s beautiful oak floor will surely please.

In Houston proper, have a look-see at Big Texas Dance Hall and Saloon, in Spring, and Firehouse Saloon, off the Southwest Freeway. Interestingly, Firehouse is owned and operated by actual firefighters. And if you don’t mind scootin’ to recorded music, Houston offers a ton of other options to boot. Have a look around.

While you’re right about both Gruene Hall and Schroeder Hall serving more frequently as concert venues than dance venues these days, the Texanist wouldn’t discount them completely. These two historic halls, with a little planning, can be absolutely magical.

These proposals do not by any means constitute an exhaustive list, and the Texanist would urge you to do some scouting on your own. You might even consider Texas Dance Hall Preservation’s Texas Dance Hall Tour, which takes place in Dallas and Fort Worth this June with stops at Dallas’s Longhorn Ballroom and Sons of Hermann Hall and Fort Worth’s National Hall and Stagecoach Ballroom. Asleep at the Wheel will be providing the music at two of those stops. Although this event takes place outside the parameters of your request, it sounds like four nights of fun, doesn’t it?

While the classic dance halls and the music and culture that surround them may be endangered, they are not yet extinct. And the very best way to see that this never happens is to keep them filled with dancers. So, on behalf of all Texans, the Texanist thanks you and your partner for doing y’all’s part.

Have a question for the Texanist? He’s always available here. Be sure to tell him where you’re from.