It's Art in the Making at Gruene's Texas Clay Fest 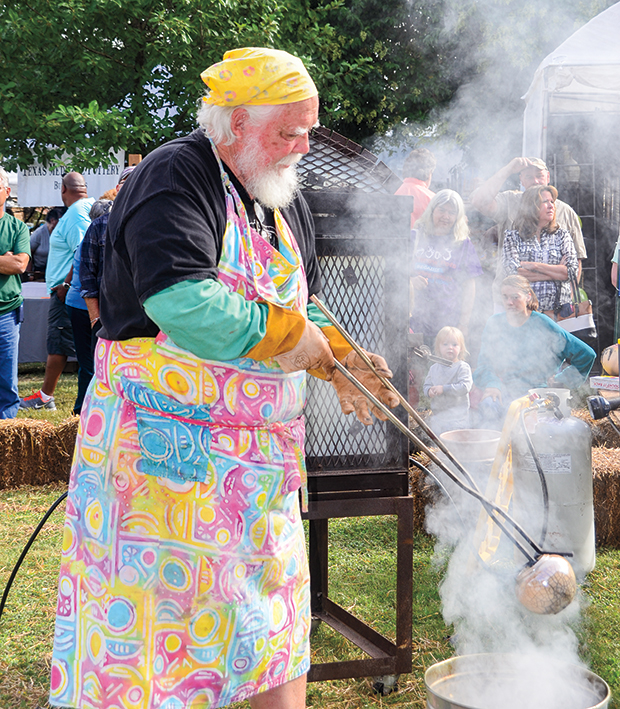 Shaded by oaks and mesquites not far from historic Gruene Hall, potters showcase their technique (and sell their wares) at the annual Texas Clay Fest.

Randy Brodnax gingerly lifts a pot from the glowing kiln interior and places it on a small turntable, rotating it slowly while misting it with water from a spray bottle. Nearby spectators can hear the glaze crackle as the outer, water-cooled layer of clay crazes and tiny fissures open up over the surface of the piece. Then Brodnax takes a few strands of hair given by an audience member and drapes them over the pot. The hair smokes and brands the piece, becoming part of it.

Texas Clay Festival, takes place annually in downtown Gruene the fourth full weekend in October (Oct. 28-29 this year). Parking is free, and the festival area is within easy walking distance to restaurants and Gruene Hall.

Spellbound, the audience watches as Brodnax places a scrap of paper inside the pot, then asks a volunteer to blow out the flames. “Can’t you blow harder than that?” he teases as he puts the pot into a garbage can with several sheets of paper and clamps the lid on. Smoke pours from matching holes on either side of the can. “Holes provided by a friend’s deer rifle,” he says.

Fire is at the heart of pottery making, and Brodnax provides the heat—and the humor—at the Texas Clay Festival, which is held each fall in downtown Gruene (Oct. 28-29). As the pot absorbs smoke into the crackle finish, Brodnax gives the audience a short tutorial on the ancient Japanese potting technique of raku. “Texas potters fell in love with the process and souped it up,” he says. As he lifts the pot from the can with tongs, black lines from the smoke zigzag across its surface. The audience is stunned. “Oh my gosh, it’s beautiful,” a woman exclaims.

While Brodnax takes center stage, other artists host demonstrations in four tents scattered among artists’ booths shaded by large oaks and mesquites. I wander over to watch Daphne Hatcher build a bowl with a bark pattern using pliable strips of clay that have been pressed against a tree trunk. Nearby, Mary Fischer is using handmade inks to decorate sheets of clay that will transform into whatever she envisions.

In another area, Frank Campbell slams a hunk of clay onto a small board and places it on a rotating potter’s wheel. He presses a thumb into the center, and the clay magically transforms into a thick-walled mug. Campbell presses a credit card against its side, and waves of clay travel upward as the mug wall thins and rises. Seconds later he uses a thin wire to sever it from the base and start another, all the while telling stories about growing up in Oklahoma and commenting on the potter’s challenge of sustainable pricing. “I strive to achieve a level of excellence that can be sold at a reasonable price,” he says. “People will pay $40 for a mug. They won’t pay $80.”

Pottery is usable art, and part of the purpose of the Texas Clay Festival is to educate the public about what goes into making a piece. “When we started the festival 25 years ago, few people
understood that pottery is a hand-made work of art,” festival director Jan Brieger says. “We needed to show customers the process so they would understand the work and creativity that go into a piece, and why it’s worthy of being priced as a work of art.”

A group of potter friends that included Terry and Dee Buck, Billy Ray and Beverly Mangham, Jan and Jon Brieger, and others joined forces to start the festival in 1992. Each year 70 potters take part, some by invitation and others chosen by a jury. “Early on we thought of having the demonstrations; we now have 40 over the weekend,” Dee Buck says. “They are like free mini-workshops, and they help develop good consumers and patrons.”

“Clay is a great material,” says Billy Ray Mangham, who is currently creating a series of works featuring Texas musicians. “You can go from idea to finished object in a week. Plus, clay helps keep me centered and focused, to be here in the present.” Looking at his whimsical, multicolored dog faces, it’s obvious that one of the charms of clay is its ability to loosen the bonds of reality and let the imagination soar.

Nowhere is that more obvious than in Carl Block’s booth. Jugs with grotesque faces exploding from within contrast with soothing serenades from Block’s guitar-playing. It makes me wonder where in the world the idea came from. “There’s a Southern folk tradition of putting faces on jugs,” he explains. “Back then they were fired in wood kilns and were brown. I like bright colors, so I ramped it up. I have one foot in tradition and one foot moving forward.”

Potter Janice Joplin capitalizes on another folk tradition—Halloween. Her most popular pieces are scary monster pumpkins, and she attracts a number of would-be potters to her demonstration and workshop. Thirteen people step up to the table to make their own pumpkins, and every one of them jumps when she slams a slab of clay onto the tabletop to flatten and widen it. “Guaranteed to build shoulder muscles,” she says with a laugh. But soon everyone is slamming and molding the resulting rectangle around a wad of newspaper to give it form, then using straws, ballpoint pens, and fingers to slice, gouge, and form the clay. In 20 minutes everyone has a recognizable pumpkin, validating Joplin’s guidance: “There is no one right way to do it. You have a blank canvas. You can do whatever you want with it. Have fun with the clay. If you overthink it, you’ll never make anything.”

That advice lingers in my mind as I walk through the booths. Clay can become anything you want it to be—fanciful, useful, decorative, or just plain weird. Ron Boling’s abstract patterns undulate across plates, pots, and wall hangings. Marian Haigh’s use of color reminds me of West Texas and New Mexico. Kids at the children’s area bring back childhood memories of sitting in the backyard with my grandmother, making clay cows and horses.
I even find myself, reflected in a pottery-framed mirror by Jason Hooper. But I’m really looking for my wife, Zoe Ann, who is on a mission to get her Christmas shopping done early. I think I spot a trail of smoke, and it’s not from Brodnax’s area. Zoe Ann’s credit card is smokin’ (and mine is slightly warm), having just scored the winning bid for one of Billy Ray Mangham’s dog faces in the silent auction. The Texas Clay Festival has worked its magic on us. We’ve become educated patrons.