From Austin To San Antonio: My 13 Favorite Experiences Along I-35 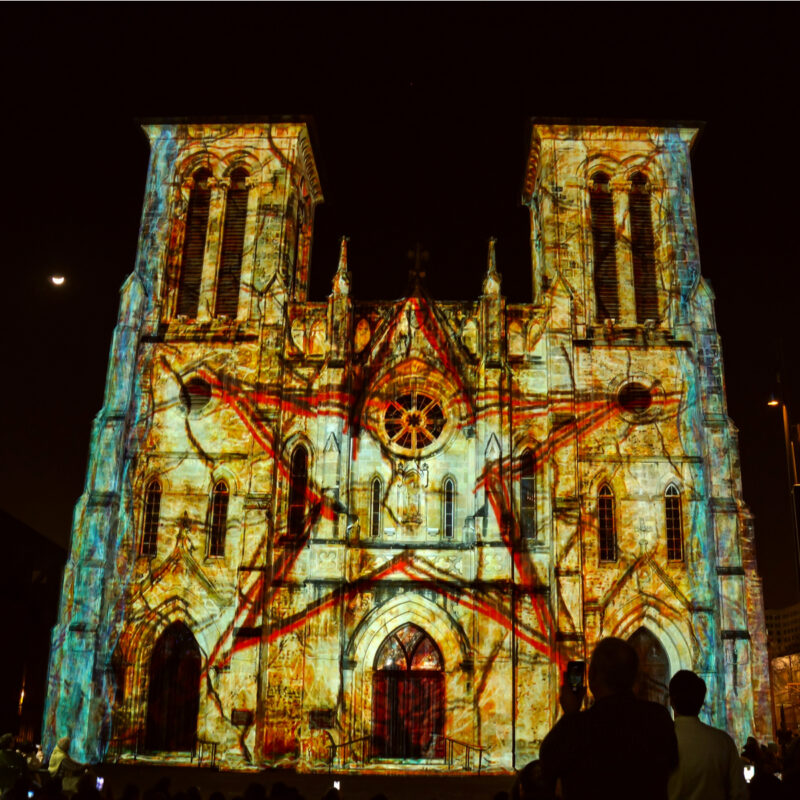 Mention San Antonio, and people immediately think of the Alamo – maybe the Riverwalk. But the city, and others in Texas Hill Country, are home to more than those two treasures. From an African safari in the middle of Hill Country to art on the sides of buildings in Austin, exploring Texas is more than just hitting the popular joints. While we enjoyed seeing the Alamo and walking along San Antonio’s water attraction, my wife and I loved exploring attractions along Interstate 35 in San Antonio and Texas Hill Country.

Here, in no particular order, are my top choices for places to visit along Interstate 35 between San Antonio and Austin.

Offering a different take on Texas’s cowboy days, the Briscoe Western Art Museum embraces contemporary artists’ views on the wild west. The museum includes art highlighting the region’s history from the perspective of Indigenous peoples, Mexico’s vaqueros, and Anglo settlers. With saddles once used by Pancho Villa as well as sculptures celebrating Native American leaders Sitting Bull and Crazy Horse, the Briscoe shares stories with the art. Anglo art features wagons and a stagecoach as well as remnants from the Alamo. A self-guided tour of the museum’s three floors includes beautiful art intertwined with the region’s history. An exhibit hall features special exhibits. Afterward, stroll through the outdoor sculpture garden.

With giraffes, wildebeest, sable antelope, and ostriches, New Braunfels‘ Natural Bridge Wildlife Ranch transports visitors to Africa’s Serengeti. Featuring 24 species, the ranch offers guided and self-guided tours at the drive-thru sanctuary. A guided tour includes lots of background information on the animals. Tours typically take 2-3 hours, and I recommend purchasing some feed pellets to share among the animals, as they will approach vehicles and appreciate the treats. The landscape’s hills, woods, and flat, open spaces make it easy to envision you’re in Africa. The ranch also includes a walking section that features lemurs and African crowned cranes. While there, visitors can grab a bite or treat at the cafe and pick up souvenirs in the gift shop.

The wildlife ranch is part of dual attractions in the area. Natural Bridge Caverns started with a 60-foot-long limestone bridge over a valley. In 1960, college students explored underground and found 2 miles of breathtaking views with jagged rock formations, spires, and paths. Today, visitors can explore about a half-mile of the caverns on the Discovery Tour. Traveling 180 feet below the surface, your guided tour on a lighted path takes you along flowstones, chandeliers, and soda straw formations. The Hidden Passages Tour takes explorers into a different section of the caverns, where you’ll see unique shapes, including stalactites and cave ribbons. Each tour takes about an hour. However, you can combine the tours for a sure-fire fun exploration of the Natural Bridge Caverns. Plan for about 2 hours.

Make your visit a full-day event with the wildlife ranch and caverns, as well as checking out the zip rails and ropes course. You’ll traverse along rope obstacles and zip rails 60 feet above the ground.

Home to the Air Force’s basic training squadrons, San Antonio‘s Lackland Air Force Base includes the Security Forces Museum, offering a look at the service’s law enforcement and security forces history. From the days of the Air Police to duty during the Middle East conflicts, the two-floor museum gives an interesting look at the military service’s police history. Free and open to the public, veterans and others will enjoy an up-close look at the Air Force unit.

Pro Tip: Visitors must have a valid state-issued ID, such as a driver’s license as well as auto registration and proof of insurance to gain access. The base visitors center verifies information, which can take 30-60 minutes, so you’ll want to plan accordingly.

A must for any visitor, explore Austin‘s unique vibe through its public art mural scene. Begin with the Greetings from Austin mural on First Street, then head to South Congress Avenue, where you’ll find dozens of beautiful art pieces along the walls of shops and restaurants. From Willie Nelson for President and Mr. Rogers to bison, South Congress shows off artists’ takes on beautiful art.

Pro Tip: Parking can be a challenge. However, there is street parking available a block or two off of Congress, as well as parking garages on the main route. Congress can be a long walk, so you may want to find a garage about midway along the avenue.

Among beautiful flowers and botanicals, enjoy touring 18 historical buildings that help tell New Braunfels’ history. Each building at the New Braunfels Conservation Plaza represents an era in the city’s history. From an 1849 farm barn loaded with equipment and an 1865 general store to an early 1900s auto garage complete with an antique car inside, stroll 3.5 acres, soaking in the history of this Hill Country community.

Pro Tip: Wear comfortable walking shoes, as most of the paths are gravel.

Market Square offers more than just a home for outstanding restaurants and shops. Explore the city’s Latin history by strolling through the market’s shops. You’ll learn the story behind major attractions and events, such as dolls celebrating Dia de los Muertos (Day of the Dead), as well as enjoy the vibrant colors of Mexican pottery.

Pro Tip: The Market Square has a parking garage about a block from the main attractions. I recommend parking there. With elevators and stairs, it offers easy access to the shopping center.

As Texas’ botanical garden, the Lady Bird Johnson Wildlife Center highlights plants and flowers native to the state. Exploring more than a dozen gardens, from pollinator gardens with flowers and plants attractive to butterflies and a variety of bees to a grove of important regional oak trees, the botanical garden is home to about 900 species of plants and flowers. You’ll find cacti, a variety of flowers, and prairie grass among the gardens. The wildflower center, opened in 1982 and renamed in honor of the former First Lady of the United States in 1997, features an observation tower that provides impressive views of its 284 acres.

Pro Tip: Wear comfortable walking shoes during your visit. While most paths are paved, you should always be on the lookout for any uneven spots. It’s easy to spend several hours at the wildlife center, so you may want to enjoy lunch or a delicious baked treat at the café.

Learn about the history of key Texans, such as Sam Houston, during a guided tour of the state capitol. As you explore the building during a 1-hour guided outing (self-guided tours are also available), you’ll visit both chambers of the Texas legislature and learn about the art inside the House of Representatives and Senate. When you arrive at the capitol, stand in the middle of the rotunda and look up at the dome; you’ll see Texas spelled out around the star. After your tour, explore the capitol’s grounds, checking out its natural beauty and sculptures in the area.

San Fernando Cathedral’s facade lights up at night, telling the story of San Antonio. The Saga – a laser and light show focused on the area’s history from its prehistoric era through the Alamo and contemporary times – immerses the front of the church at San Antonio’s Plaza de Las Islas Canarias in history. The laser show, complete with music and other audio, runs at night on Tuesday and from Friday through Sunday.

New Braunfels’ German immigration and Mexican history are on display through a series of downtown murals. Offering a look at the city’s Hispanic influence, a large mural tells the story from early agriculture days through Spanish expeditions, as well as a look at vaqueros. Other murals explore the German immigration to Hill Country, organized by Prince Carl of Solms-Braunfels. Another mural celebrates New Braunfels’ entertainment history, including movie theaters and western dances.

Home to the world-famous bat watching under the Congress Avenue bridge, Lady Bird Lake offers a variety of fun activities. Formerly known as Town Lake, Lady Bird Lake is actually a reservoir on the Colorado River. Covering more than 450 acres, the lake attracts kayakers as well as riverboat tours. With plenty of trails, it’s a popular walking area with amazing views of nature and Austin’s downtown skyline. Perhaps lesser-known, a wetlands area is located near the lake. With birds such as cormorants, egrets, and herons, it’s easy to spend hours admiring them as they move about freely from one grass area to another, or spend time on rocks or logs.

With river temperatures at 72 degrees Fahrenheit year-round, the San Marcos River is a must for water playtime. Whether you prefer to go tubing (floating on the river on an inflated inner tube) or enjoy a workout with a stand-up paddling experience, the San Marcos River offers a lot of fun. Consider renting a kayak for a more-relaxed float on the water.

While the Lyndon B. Johnson Presidential Library is located in Austin, San Marcos was a major influence in his life. Attending college, his experiences at Texas State University helped form his social and political views, paving the way for his leadership in passing civil rights legislation as president. Exhibits at the LBJ Museum of San Marcos include presidential artifacts and memorabilia, paintings, book collections, and a copy of his Great Society speech.